The “Show” box underneath displays Full Contents & Jump Links for your convenience.

The continued sharp decline in working hours globally due to the COVID-19 outbreak means that 1.6 billion workers in the informal economy – that is nearly half of the global workforce – stand in immediate danger of having their livelihoods destroyed, warns the International Labour Organization.

In G7 countries, the unemployment spiked at the beginning of the lock-down and showed a recovery like the below chart from the World Economic Forum shows; 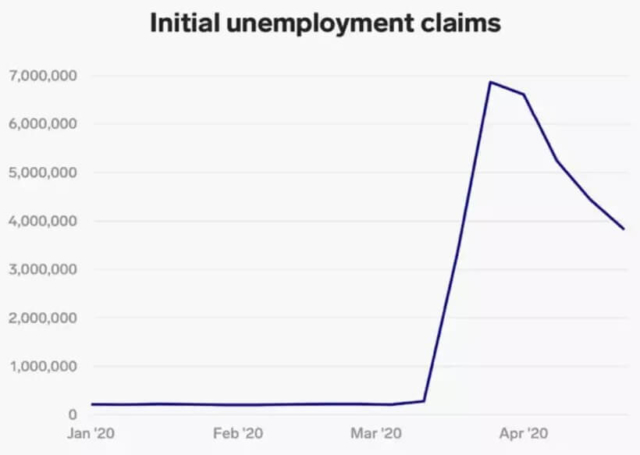 However, we don’t know if such recovery continues given the fear of the 2nd wave.

As a matter of fact, before coronavirus pandemic outbroke, we had already known that Job certainty is completely an illusion especially among middle-class people. We will show you in several charts.

Let me share a bit about World Income Inequality measured by GINI Coefficient. What is the Gini Index?

The Gini index or Gini coefficient is a statistical measure of distribution developed by the Italian statistician Corrado Gini in 1912. It is often used as a gauge of economic inequality, measuring income distribution or, less commonly, wealth distribution among a population. The coefficient ranges from 0 (or 0%) to 1 (or 100%), with 0 representing perfect equality and 1 representing perfect inequality. Values over 1 are theoretically possible due to negative income or wealth.Investpedia
Wikimedia Commons visualize the world GINI index by country as below; 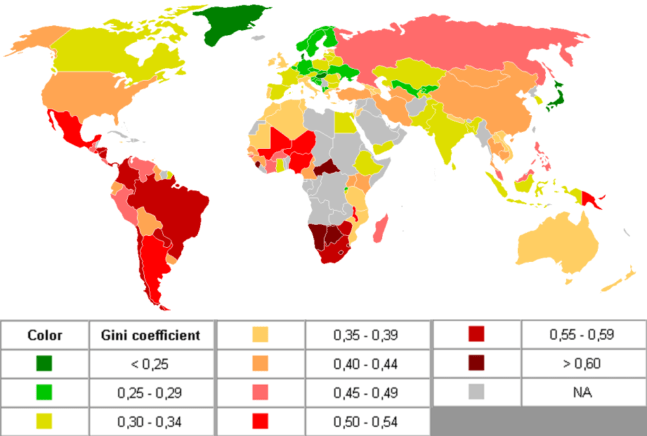 It looks the advanced countries are more equal than the emerging countries. However, this data is relatively old (2006) and the important trend is that the gap between the rich and the poor is becoming wider & wider not only in the developing countries but also prominent in the advanced economies represented by the USA. World Inequality Report 2018 indicates;
Income inequality has increased in nearly all world regions in recent decades, but at different speeds. The global top 1% earners have captured twice as much of that growth as the 50% poorest individuals.World Inequality Lab Report 2018
Top 1% vs. bottom 50% national income shares in the US; 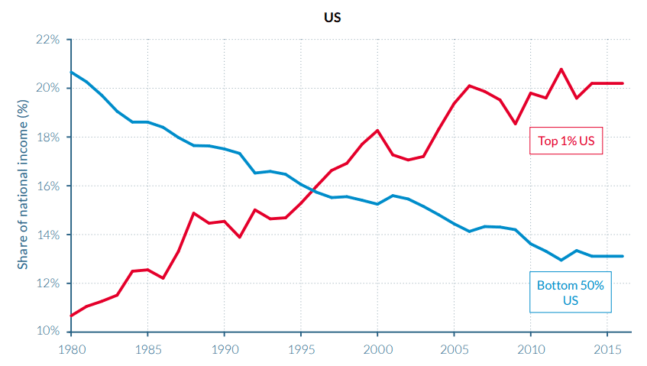 Importantly, the middle class has been most squeezed;
The bottom 50% has nevertheless enjoyed important growth rates. The global middle class (which contains all of the poorest 90% income groups in the EU and the United States) has been squeezed.World Inequality Lab Report 2018 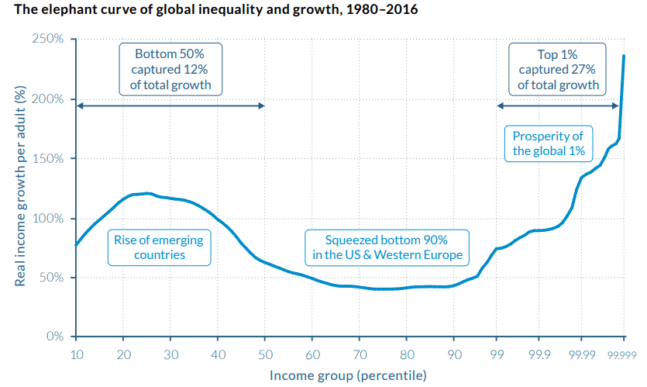 Clearly, the Middle class where the majority of us belong to is decreasing more and more and many of middle-class people are facing the risk of dropping into low life. Nevertheless, you may say “I have a daily job and earn enough money for living. Thus, I don’t need to work more for the second source of income”. However, let me stress that we live in uncertainties. Actually, 1 in 7 workers was made redundant during the last financial crisis (2008) in the UK.

Remember the impact of the recession in the UK was relatively mild among the developed countries. Only 20% of people made redundant could find a new job within 3 months, and 75% of them are paid less in the next job. This is the harsh reality, and the economy is cyclical and the bubble will burst at any time out of the blue on top of the unprecedented coronavirus pandemic.

It means your life is always exposed to the threat of losing a job. Still not convinced? Allow me to substantiate how the middle class should feel a pinch and a sense of urgency with further numbers & different perspectives.

Middle Class Is Really In Danger

The global wealth middle class will be squeezed under “business as usual.” ▶ Rising Wealth inequality within countries has helped to spur increases in global wealth inequality. if we assume the world trend to be captured by the combined experience of China, Europe and the United States, the wealth share of the world’s top 1% wealthiest people increased from 28% to 33%, while the share commanded by the bottom 75% oscillated around 10% between 1980 and 2016. ▶ the continuation of past wealth-inequality trends will see the wealth share of the top 0.1% global wealth owners (in a world represented by China, the EU, and the United States) catch up with the share of the global wealth middle class by 2050.World Inequality Report 2018 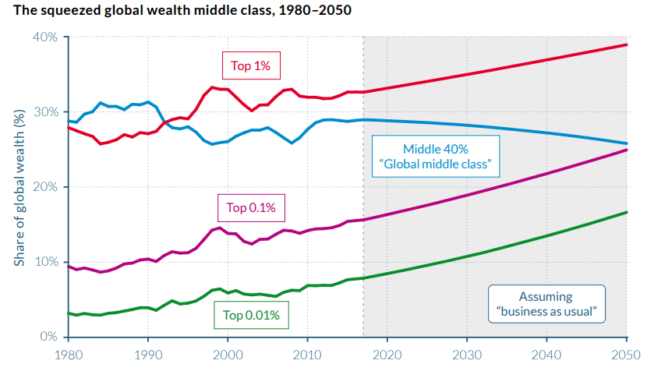 So, assuming that the current trend as business as usual continues, the projection of the middle-class wealth will be stagnant / declining.

Needless to say, the welfare benefit is for the lower class. The principle of the below US case shown in the chart applies more or less to many developed countries. And, people in the middle class will shout “How come someone earning $36 an hour can have a lower household income than someone earning $8 an hour.”; 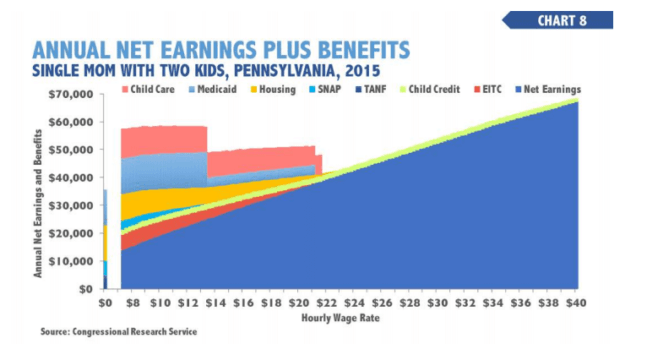 So, lower-income class people are protected by social benefits, therefore you as the middle class tend to be most squeezed.

Uncertainties You Will Face

Uncertainty and fears of social decline and exclusion have reached the middle classes in many societies. The uncertainties in the middle class, especially in advanced countries, attribute to the gloomy job market as follows;

The IMF report(Finance and Development, A quarterly magazine of the IMF Vol.45) indicates the massive income transfer to poorest 30% population is happening, means advanced countries job are being outsourced to the developing countries. The higher the income inequality less positive toward globalization, in other words, the globalization spurs the inequality by squeezing middle-class jobs. 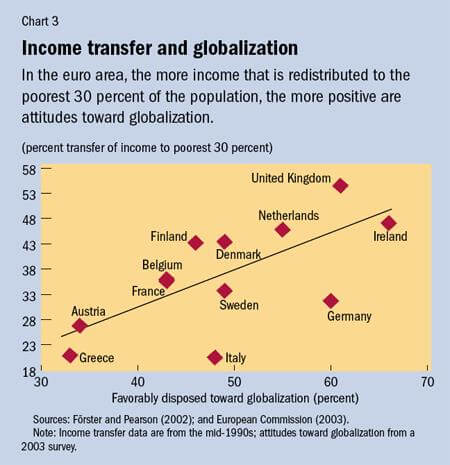 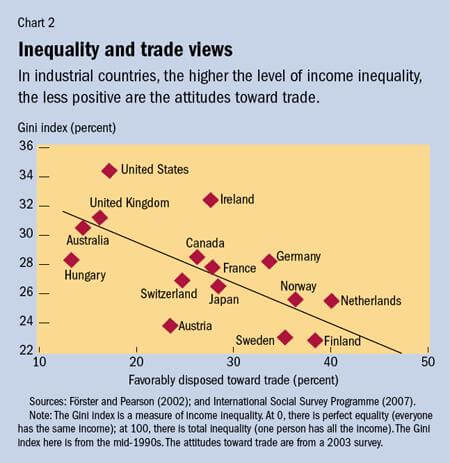 Technologies – Robot will take over your job

Oxford University research summarizes (for details), among 702 occupations in 12 categories of total US employment, nearly 70% is at high to medium risk of getting replaced by robots over some unspecified number of years perhaps a decade or two. As seen from the chart, the unlikely job is a high-end skill-oriented job, which is another reason the middle class should worry. 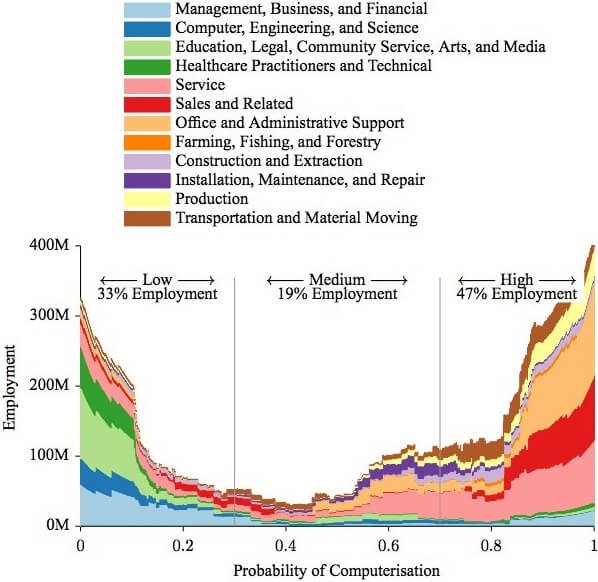 The middle class is In the Vulnerable Status.

BBC summarized the latest OECD report by saying “the middle classes are being “hollowed out”, with declining chances of rising prosperity and growing fears of job insecurity.” It shows Middle-Class Dismal Growth as;

From an international perspective, the OECD shows a changing economic model, in which high earners have accelerated upwards, while those in the middle have seen “dismal income growth” or a falling back. – Across OECD countries, which include most of the big economies in Western Europe and North America, the 10% of highest earners have increased their income by a third more than middle earners – In the UK, more than a third of middle-income households “report having difficulty making ends meet”, says the OECD – In the United States over the past three decades, the top 1% of earners have increased their slice of total annual income from 11% to 20% “Middle incomes are barely higher today than they were 10 years ago,” says the analysis.BBC - Middle classes losing out to ultra-rich 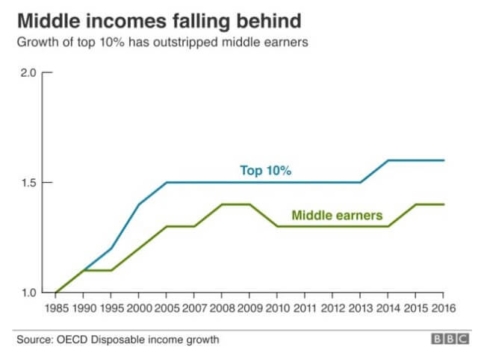 It confirms middle-class households feel a sense of “unfairness” and are “increasingly anxious about their economic situation”.[/su_spoiler]

Financial Security – Your Self Assessment

Assess Your Income Status In Your Society

Firstly, examine How Accurately You Grasp Your Income Status In Your Society. Wherever you live, just assess your Income in comparison with the rest of the population in your country and know the difference between What You Perceive & Reality.  Clicking OECD, which will navigate you to the below page; 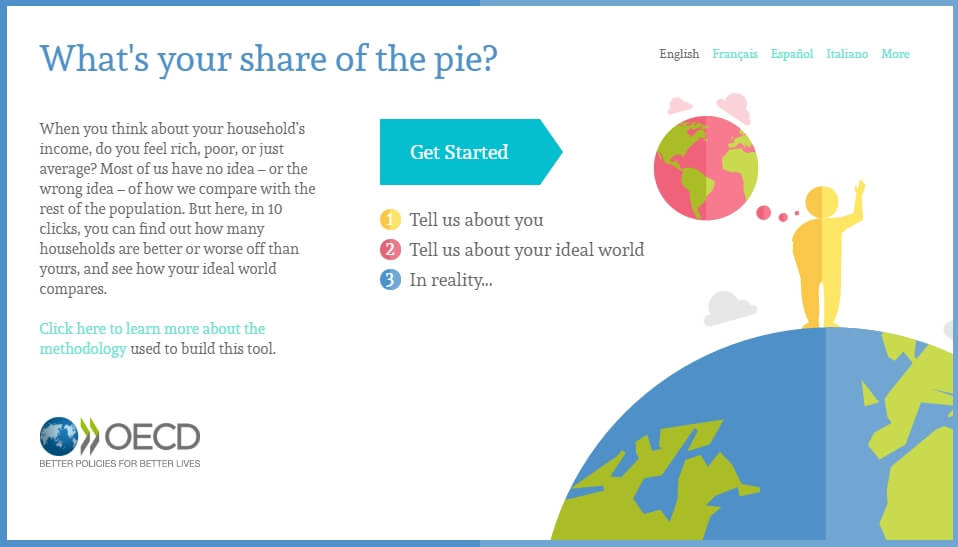 Does your original perception match the reality? And, if you’re fortunate enough to be in the Top 1 % of Income, you may not need to assess further. However, if you belong to the rest of the 99% population, then you may want to assess how you are secured for your retirement.

Spare Another 1 Minutes To Assess Yourself Further for Your Long Future!!!

Let’s Examine How Well You’re Ready For Your Retirement

Go To Fidelity Retirement Score, answer 6 simple questions then you will get the retirement score like below. The underlying assumptions (inflation, social security & tax etc) of this software is based on US parameters thus your condition may differ though the objective here is not making an accurate simulation just trying to roughly assess how well you are fit for your future retirement life. Therefore don’t take it seriously. If the score doesn’t reach On Target, it’s a sort of indication that you may need to improve some factor(s). 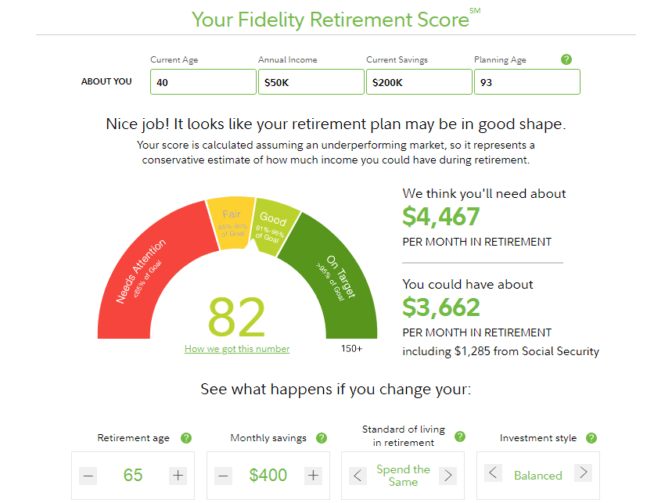 So, how did you assess your financial status?

It’s said that you need the contingency savings worth at least 6-month salary.

Otherwise, you will be in serious trouble when an unwelcome event such as job loss actually happens to you. Unless you’re happy-go-lucky person, it’s better to start making extra money conveniently e.g. online, as your Safety Net.

Yes, Diversify Your Income For A Rainy Day while you have a daily job.

So, how can you do it? Go 3 Clever Ways to Diversify Your Income for a Rainy Day.

Could not find related articles.

Matched Betting in Germany – Use DoppelWetten
Check if you need extra money via self-assessment and find how to create it.

You can find out more about which cookies we are using or switch them off in settings.

This website uses cookies so that we can provide you with the best user experience possible. Cookie information is stored in your browser and performs functions such as recognising you when you return to our website and helping our team to understand which sections of the website you find most interesting and useful.

Strictly Necessary Cookie should be enabled at all times so that we can save your preferences for cookie settings.

If you disable this cookie, we will not be able to save your preferences. This means that every time you visit this website you will need to enable or disable cookies again.